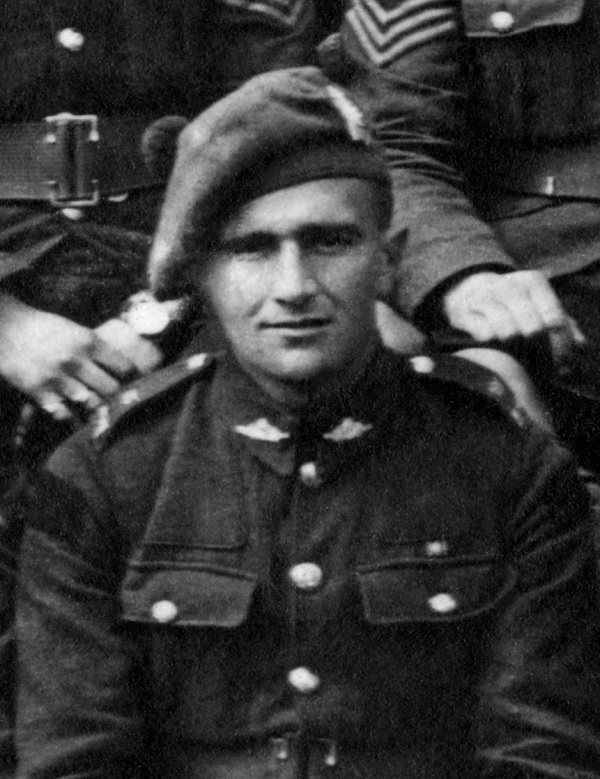 Titus Milton Mossman was born on January 1, 1894, in the small coastal community of Upper Kingsburg on the south shore of Nova Scotia’s Lunenburg County. He was one of eleven children born to Albert and Letitia Mossman. At the early age of 13, Titus began what would turn out to be a lifelong career in the fishing industry, interrupted by his military service during the war. Starting out with menial work on fishing schooners working the Grand Banks, he would later become a sea cook on the same vessels.

After the outbreak of the First World War, Titus temporarily left the sea behind to join the army. In October, 1915, he enlisted in the 85th Battalion (Nova Scotia Highlanders), a newly formed Nova Scotia highland infantry unit that was recruiting across the province for overseas duty. He was assigned the rank of private and the service number 222568. Shortly after enlisting, Titus relocated to Halifax where the battalion was mobilizing. Its headquarters was at the Halifax Armoury. The men were accommodated either in the Armoury building or in tents on the nearby Halifax Common. Wooden huts later replaced the tents. Uniforms and equipment were issued and basic training began in earnest. In May of 1916, the 85th Battalion moved to a large military training camp located in Aldershot, NS, where it joined its three sister battalions, all part of the newly formed Nova Scotia Highland Brigade. For Titus and the men of his unit, military training intensified in the pine forests and sandy soil of Camp Aldershot.

In early October, 1916, Titus and his comrades in arms of the four battalions of the Nova Scotia Highland Brigade left Aldershot by train for Halifax, where they boarded the huge troop ship RMS Olympic, sister ship of the RMS Titanic. On the evening of October 13th they departed Halifax bound for England. The voyage was uneventful and the ship docked at the port of Liverpool five days later. The men immediately disembarked and were sent to Witley Camp in southern England.

After arriving in England, the Nova Scotia Highland Brigade was broken up and the 85th Battalion was slated for deployment to France to join the Canadian troops already fighting there. The other battalions of the brigade were eventually disbanded to be used as reinforcements for units already at the front.

On February 10, 1917, the 85th Battalion sailed across the English Channel and disembarked at Boulogne, France. Soon after, they found themselves in the trenches of the Western Front. Their first battle was at Vimy Ridge where two companies of the 85th Battalion captured Hill 145, a dominating point on the ridge that had withstood repeated attacks by other Canadian battalions. After that, the battalion was regularly rotated back and forth from the front and participated in every major engagement of the Canadian Corps in France and Belgium to the end of the war. With the exception of several months away from the battalion due to illness, and a couple of short leaves, Titus was with his battalion throughout their time on the Continent.

After arriving in France, Titus was continually promoted through the non-commissioned ranks and by the war’s end held the rank of company sergeant major.

During the heavy fighting in France, Titus was awarded a Military Medal and then a Bar to the Military Medal, essentially earning the medal twice. He was only one of twelve men in the battalion to hold that distinction.

His recommendation for the Military Medal was written by Major John MacIntosh Millar, temporary commanding officer of the 85th Battalion:

“For conspicuous gallantry in action. During the L.C. (Llandovery Castle) Operations of 10th August 1918, in front of Rosieres, when the company commander became a casualty, he showed great coolness and courage in keeping his part of the line well under control, and showed great judgement in advancing against very heavy machine gun fire, and, when the objective was reached, and all the officers except one reported casualties, he was of great assistance in re-organizing the company, putting out posts and establishing a defensive flank on the left.”

Titus’ recommendation for the Bar to the Military Medal was written by Lt-Col. James Layton Ralston, the commanding officer of the 85th Battalion:

“For conspicuous gallantry and bravery in the face of the enemy. During the recent operations of September 2nd 1918, on the right of Dury, a group of Huns made a stand at the entrance of a dugout and were firing on our line. Sergeant Mossman rushed forward, killed two and sent the remainder of the group back to our lines as prisoners. This act enabled our line to pass this point without further casualties. On reaching the objective he rendered his company commander most valuable service, in re-organizing the company.”

After the war ended, the 85th Battalion was billeted in Belgium for approximately five months. Titus returned home with the battalion on the RMS Adriatic, after a short stay in England. They arrived in Halifax on June 8, 1919 to an overwhelming welcoming from family, friends and the general public. Titus received his discharge from the army a few days later.

In the years after the war, Titus traveled and tried out several occupations. For a short time he worked as a farm hand in Western Canada and spent a day or two in a laundry business in New York. In the end he returned home to Upper Kingsburg and spent the rest of his working years as a sea cook on fishing schooners.

On September 20, 1928, Titus married Helen Viola Spindler, a school teacher from the neighboring community of Rose Bay. They had known each other since childhood and they had corresponded with each other while he was overseas. They settled in Rose Bay and raised a family of three children.

Titus eventually retired in the late 1960’s and passed away on August 19, 1974 at the age of 80. He was laid to rest in Harbourview Cemetery in Rose Bay.

For further information on Titus Mossman, refer to the book Going Over, a biography of Titus Mossman, written by his son, David Mossman. It details his father's First World War service with the 85th Battalion. It was published by Potterfield Press, East Lawrencetown, NS, in 2014.

Special thanks to David Mossman for sharing photos and documents pertaining to his father, and allowing them to be scanned and added to this website.