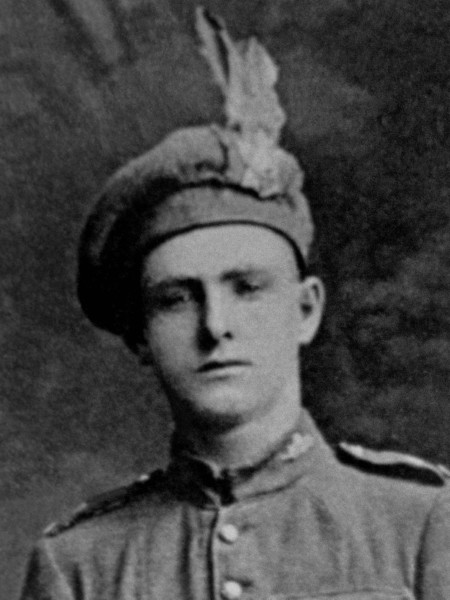 Thomas Graham was born in Sydney Mines, NS, on November 18, 1898, the son of Francis and Helen Graham. He became a coal miner at an early age. On March 13, 1916, at the age of 17, Thomas left the mines and enlisted in the 185th Battalion (Cape Breton Highlanders). He was issued the service number 877398. At the time, the 185th Battalion was mobilizing in the abandoned mining town of Broughton, near Sydney.

Two months later Thomas and his new unit relocated to the large prewar military training camp at Aldershot, NS, where they joined the other battalions of the newly formed Nova Scotia Highland Brigade. After intensive training in Aldershot during the summer and early fall, the brigade departed Canada for England in October, 1916, on the RMS Olympic, a large ocean liner turned troop ship.

At the end of December, 1916, two months after arriving in England, Thomas was transferred to the 193rd Battalion (Nova Scotia Highlanders), one of the other three battalions of the Nova Scotia Highland Brigade.  Just after his transfer, word was received that the brigade was to be dissolved and two of the battalions, including Thomas’ 193rd Battalion, were to be disbanded and used for reinforcements for units already at the front. As a result, Thomas was transferred to the 17th Canadian Reserve Battalion at Bramshott, England. On May, 2, 1917, he was transferred again, this time to the Canadian Forestry Corps’ base camp located in Sunningdale, England, where he was soon posted to the newly formed 37th Company, Canadian Forestry Corps. The company disembarked at Le Havre, France, on May 18, 1917. Their primary job was to cut and mill timber to supply the massive amount of lumber required for the front lines. Thomas may have been transferred to the Canadian Forestry Corps, a non-combat unit, due to his young age. He was only 18 at the time.

On October 4, 1918, Thomas was transferred to an infantry unit at the front. He joined the 44th Battalion (New Brunswick). They were originally recruited in Manitoba and were designated the 44th Battalion (Manitoba), but they had sustained so many casualties and since most of the new reinforcements were coming from the Maritimes, they were re-designated with the new name. Thomas was only with his new battalion a little over a month before the war ended.

Thomas returned to Canada, via England, with the 44th Battalion. They disembarked in Saint John, NB where Thomas was discharged from the army on June 6, 1919.

After the war, Thomas returned to his home town of Sydney Mines where he resumed working in the coal mines. He met and married Alice Dares and they raised four children, Thomas, Annie, Edith and Frank. They lived on Fraser Avenue.

Thomas Graham passed away on June 6, 1952 at the relatively young age of 52. He was laid to rest in a family plot his son Thomas had purchased in Queensville Cemetery, York Regional Municipality, Ontario.

For additional information on Thomas Graham, refer to the following online source:

Thanks to Thomas Graham of Phoenix, Arizona, grandson and namesake of Pte. Thomas Graham, for providing photos and family information.

Thomas Graham’s attestation papers and other documents in his service file record his date of birth as November 18, 1898 and his place of birth as Sydney Mines, NS. His headstone at his grave site in Queensville Cemetery in Ontario is inscribed with his date of birth as August 18, 1898. Unfortunately the Graham family could not be located in the 1911 Canadian Census data to corroborate this information.