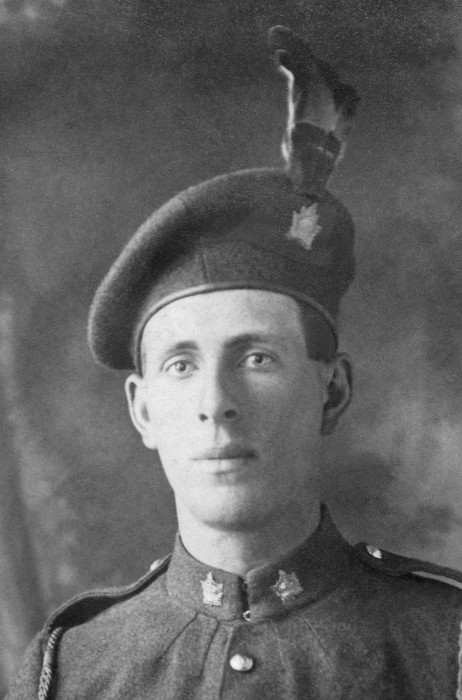 Percy Allison Weatherby was born in Lower Truro, Colchester County, NS, on September 6, 1897, the son of Henry Allison and Agnes Jane (Sweet) Weatherby. On March 11, 1916, at the age of 18, Percy enlisted, with the 193rd Battalion (Nova Scotia Highlanders) in Truro, NS. His rank was private and he was assigned service number 901193. Percy’s attestation paper states his trade as steam fitter. He had no previous militia service.

Percy trained with the 193rd Battalion in Truro for a couple of months until the battalion relocated to Aldershot, NS, later in the spring. There they joined the other three battalions of the newly formed Nova Scotia Highland Brigade, and training continued. In October, 1916, Percy sailed with his battalion, and the rest of the brigade, to England on the RMS Olympic, the sister ship of the Titanic.

Shortly after arriving in England, the Nova Scotia Highland Brigade was dissolved and two of its battalions, including the 193rd Battalion, were disbanded. The intention was to use its cadre of men as reinforcements for units already at the front. As a result, on December 19, 1916, Percy was transferred to the 185th Battalion (Cape Breton Highlanders) who were also at Witley Camp. A little over a year later, when the 185th Battalion was also disbanded, Percy was transferred to the 17th Reserve Battalion located in Bramshott. He joined that unit on February 23, 1918. A month later he was transferred yet again, this time to the Canadian Engineer Training Depot located in Seaford, England. His rank changed from private to sapper. After completing his training, Percy was assigned to the field and on September 28, 1918, joined the 6th Battalion Canadian Engineers in France. That unit had been organized in France the previous June. The war ended less than two months later.

Percy returned to Canada in May, 1919 and was demobilized in Halifax on June 3rd. His rank at that time was driver. In 1920 Percy married Barbara Ross Johnstone who was originally from Scotland. They settled in Colchester County, NS and had one child, Ronald. In the 1930’s they relocated to Lexington, Massachusetts in the United States.

Percy Weatherby passed away on May 3, 1970, in Barnstable, Massachusetts at the age of 72. His wife Barbara predeceased him in 1958.

For additional information on Percy Allison Weatherby, refer to the following online source:

Thanks to Hans Harold Huber of Bad Bevensen, Germany, for providing information and online links pertaining to the family of Percy Allison Weatherby. Han Huber's parents purchased Percy Weatherby's house located at 21 Butler Avenue in Lexington, Massachusetts, in 1967, and as of 2022, they still live there.