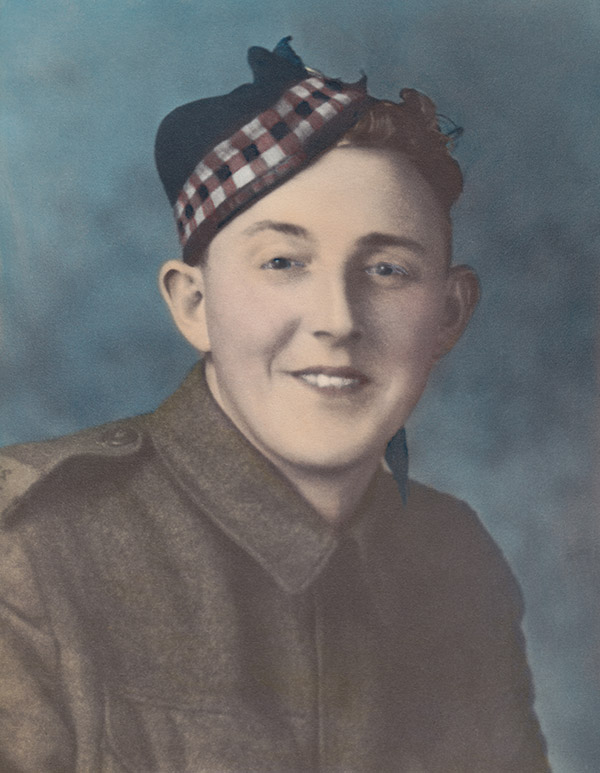 John Metcalfe, or Jack as he was better known, was born in Bell Island, Newfoundland on January 17, 1919. He moved to Glace Bay, NS, at a young age, and grew up there with his parents, Albert and Violet Metcalfe and three siblings.

In June, 1940, Jack went to Sydney and enlisted in the Cape Breton Highlanders, who at the time, were still in Cape Breton training and providing guard duties. Within a few days of enlisting, he was transferred to the North Nova Scotia Highlanders who were based out of Amherst, NS. He was sent to Amherst right away where he joined his new unit. Jack went overseas to the U.K. with the battalion in July, 1941, where training continued for the next three years.

The North Nova Scotia Highlander’s baptism of fire occurred on D-Day, June 6, 1944. Jack was with the battalion when they landed on Juno Beach in France and proceeded inland. The following morning, June 7th, the North Novas, with tanks from the 27th Armoured Regiment, captured the village of Buron, and then pushed toward Authie. Unfortunately the advance collided with strong counterattacking forces consisting of panzer grenadiers and tanks of the 12th SS Panzer Division “Hitler Youth” who had just arrived at the front. The attacking North Nova companies, and the tanks with them, were caught in the open and quickly cut to pieces. The fighting was intense and there were heavy casualties on both sides. It was during this engagement that Jack, along with numerous other North Novas, were surrounded and captured by the advancing German SS troops. After being disarmed, Jack was being searched by one of his young SS captors who suddenly machined gunned and killed him. The soldier was probably from the 25th SS Panzer Grenadier Regiment commanded by SS Standartenführer Kurt Meyer. There were many other captured unarmed Canadian troops who were killed by the SS troops that day and the days to follow.

Jack was buried in a communal grave and later exhumed and buried at Beny-sur-Mer Canadian War Cemetery in Beny-sur-Mer, Normandy, France. His parents were originally notified that he was missing, but his status was changed to killed after his body was located later. Jack was 25 years old at the time of his death. He held the rank of private.

At the time of Jack’s death, his brother Bill was with the Cape Breton Highlanders in Italy and his two sisters, Betty and Yvonne, served in the Canadian Women’s Army Corps in Canada.

For additional information on Jack Metcalfe, refer to the following online source:

I would like to thank Jack Metcalfe's neice, Heather Almon, for allowing me to copy the photos and documents contained in this collection and that belonged to her uncle and family. I visited her home in Sydney in 2015. Heather also shared photos and information on her father, Bill Metcalfe, who served in the Cape Breton Highlanders, and her aunts Betty and Yvonne Metcalfe who served in the Canadian Women's Army Corps.