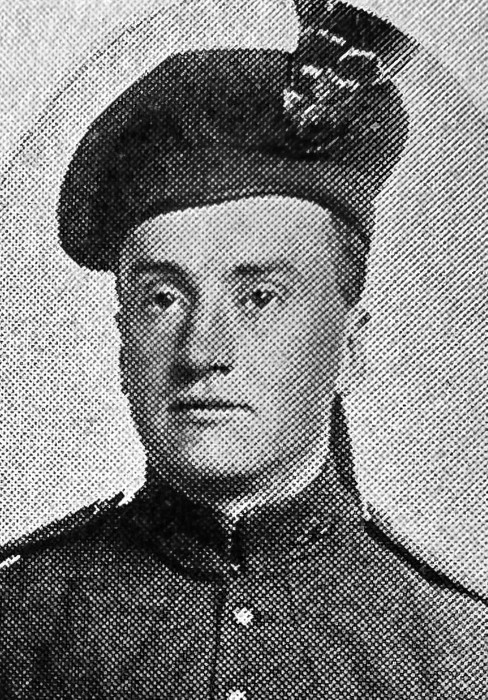 Joseph Michael Keylor was born in Kentville, NS, on May 17, 1895, the son of Michael and Maud Keylor. He enlisted with the 85th Battalion (Nova Scotia Highlanders) in Halifax, on October 30, 1915. His rank was private and he was given service number 222783. On his attestation papers, his trade is listed as upholsterer. He had previous military service with the 14th King’s Canadian Hussars, a local militia unit in Kentville.

Joseph trained with the 85th Battalion in Halifax and later at the large prewar military base in Aldershot, NS, where the 85th Battalion was united with its newly raised sister battalions to form the Nova Scotia Highland Brigade. In October, 1916, four highland battalions of the brigade (85th, 185th, 193rd and 219th) departed Halifax for England on the RMS Olympic, a former luxury liner converted to a troop ship. Once there, they were moved to Witley Camp, Surrey, in the south of England, for further training.

Shortly after arriving in England, news was received that some of the Nova Scotia highland battalions were to be disbanded with the men to be used as reinforcements for units at the front. The 193rd and 219th Battalions were dissolved, the 185th Battalion was to remain in England, and Joseph’s unit, the 85th Battalion, was to proceed to France. On February 10, 1917, the 85th Battalion crossed the English Channel and disembarked at Boulogne. They soon found themselves at the front as a work battalion. Their status changed to a fighting battalion on April 9, 1917, during the Battle for Vimy Ridge, when the 85th Battalion was ordered to attack Hill 145 and distinguished themselves with its capture and the fighting that followed. By this time, Joseph had been promoted to the rank of corporal. By the end of May he was an acting sergeant.

In late summer, Joseph received word that he would receive a Military Medal for his actions at Vimy Ridge and in the fighting to capture enemy trenches and the French town of Eleu dit Leauwette at the end of June, 1917. The recommendation for his medal reads:

“For conspicuous gallantry during the operations against the enemy in and around Eleu dit Leauwette between June 25th and July 1st, 1917. This N.C.O. organized a bombing party, going out in advance of our position, dispersed a party of the enemy, killing several and thus capturing a machine gun. All through the operations this N.C.O. did splendid work. His untiring energy and devotion to duty was of great assistance to his officers.

This N.C.O. took part in the fighting on Vimy Ridge on April 9th, and in that action showed great courage and coolness. He has always been exceedingly conscientious and his work has always been done cheerfully and well.”

Joseph was confirmed in the rank of sergeant on October 1, 1917.

On October 28, 1917, the 85th Battalion moved into the line at Passchendaele. Conditions were atrocious with rain, mud and heavy shell fire. The following day the 85th attacked as a part of a larger Canadian assault. It was at this time that Joseph was wounded in action. He was both gassed and received a scalp wound from shrapnel. He was moved back to a casualty clearing station where he died later that day. He was 22 years old.

Joseph Michael Keylor was laid to rest in Mendinghem Military Cemetery in Belgium.