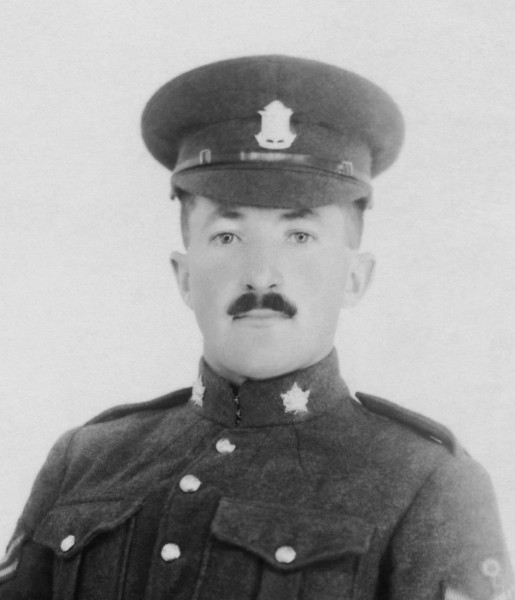 Alexander Dougald Collins was born in South West Margaree, Inverness County, NS, on November 19, 1890, the son of Angus and Mary (Coady) Collins, also of South West Margaree. Alexander enlisted in the 64th Battalion in Halifax on January 28, 1916. He was issued service number 471000 and appointed to the rank of private. His attestation papers list his trade as structural iron worker.

The 64th Battalion was authorized in the spring of 1915 and mobilized in Sussex, NB. Most of the officers came from New Brunswick and Nova Scotia but because of recruiting requirements of other battalions in the Maritimes at the time, the majority of the recruits came from Nova Scotia. The battalion relocated to the Halifax waterfront in late November, 1915, where it went into winter quarters at Pier 2. It was here that Alexander joined the unit. On March 31, 1916, the battalion embarked for England on the troop ship SS Adriatic. The battalion trained at various locations in England before being informed that it would remain in England and its men would be sent as reinforcements to units at the front.

On November 18, 1917, Alexander crossed the Channel as a reinforcement for the 25th Battalion (Nova Scotia Rifles), and joined them in the field in France on December 11, 1917. In August he was promoted to acting corporal.

On September 19, 1918, the 25th Battalion rotated back into the front lines south east of Inch-En-Artois in France. Over the next several days, under heavy shelling, both the Canadians and Germans attempted to expand their positions through localized attacks and counterattacks. On September 23, The Germans attacked 25th Battalion outposts from two flanks under a covering barrage. The attack was repulsed with casualties on both sides. Alexander was reported missing during the fighting that day and presumed to have died. The Canadian government Circumstances of Death Register for Alexander Dougald Collins states, “From information available, he was last seen lying in the side of the road, on the morning of September 23rd, 1918, wounded in both legs and arms by machine gun bullets”. Alexander was 27 years old. His body was not officially recovered.

For additional information on Alexander Dougald Collins, refer to the following online sources:

Thanks to Joan (Collins) Perry for permission to digitize family photos.