This section contains one WW1 era studio portait photo of James Archibald Anderson with his siblings. 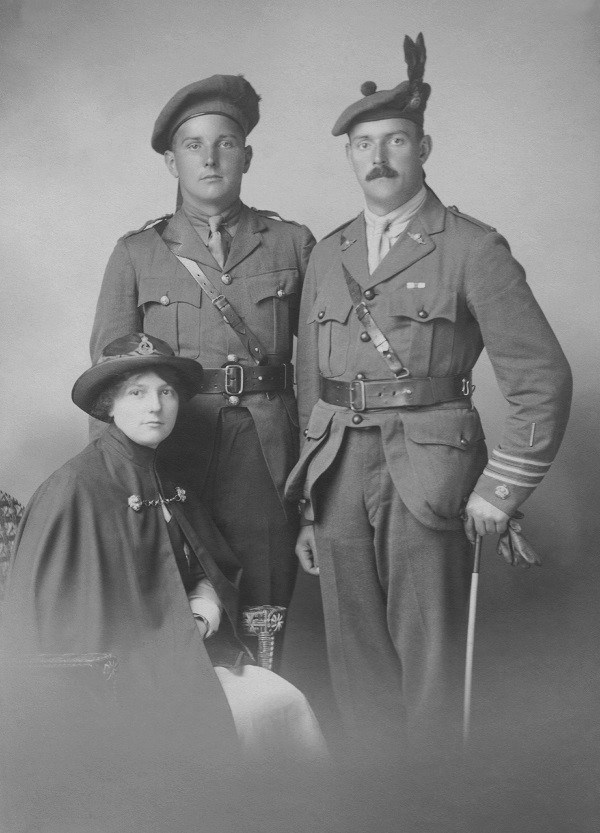 This is a wonderful studio portrait photo of Archie Anderson with his siblings. Archie is standing on the left. On the right is Percival Anderson. Sitting is Blanche Anderson. The two brothers were officers in the 85th Battalion (Nova Scotia Highlanders). Blanche was a nursing sister in the Canadian Army Medical Corps.

The photo is believed to have been taken in England in the early fall of 1917. At the time, Archie was taking courses in England to receive his commission as an officer, and Blanche was stationed in England. Percival had been convalescing from trench fever at the port city of Dieppe, France. Upon his discharge from the convalescent home, he was granted a ten day leave of absence starting on September 25, 1917. It was at this time he probably went to England where he managed to meet up with his siblings and they arranged for a portrait photo. It was the last time all three would be together. Percival was killed approximately a month after the photo was taken.

In the photo, the horizontal stripes and crown on Percival's sleeve indicate that he holds the rank of major. The vertcal stripe on his sleeve indicates that he had been wounded. Note that Archie is wearing an officer's uniform but is missing his 85th Battalion officer's cap and collar badges. He has not yet been commissioned as an officer.